Angel Di Maria saw red as struggling Juventus fell to a 1-0 defeat at Monza in Serie A, with substitute Christian Gytkjaer scoring a 74th-minute winner.

The visitors' sloppy performance was punished 16 minutes from time as Gytkjaer slammed home from a Patrick Ciurria’s cross.

A first league defeat of the season for Allegri’s men means they lose more ground on Serie A’s early pace-setters, adding to the scrutiny of the coach.

Monza started brightly with Nicolo Rovella, on loan from Juventus, flashing a volley wide of the left post.

Izzo missed a great chance to break the early deadlock as he headed over from a Marlon Santos cross, before Patrick Ciurria’s side-footed effort was just off the mark.

Juventus struggled to get going, with Dusan Vlahovic finally registering their first shot on target in the 28th minute with a tame attempt that was easily saved.

The Bianconeri were down to 10 men before the break, as Di Maria saw red for a petulant elbow in the chest of Izzo as the two battled for possession.

2017 - Today against Monza Ángel Di María received his first red card in a league game since 30 April 2017 against Nice. Nervous.#MonzaJuve

After the interval, the home side's Dany Mota should have done better when he turned a cross past the post, before Juventus goalkeeper Mattia Perin made a smart stop to keep out Carlos Augusto’s powerful shot.

The hosts finally got their reward when Gytkjaer smashed home from Ciurria’s deflected cross to spark wild celebrations from the home faithful.

Juventus pushed for an equaliser, but an easily saved Moise Kean header was as close as they came, making it now five games without a victory in all competitions for the Turin giants. 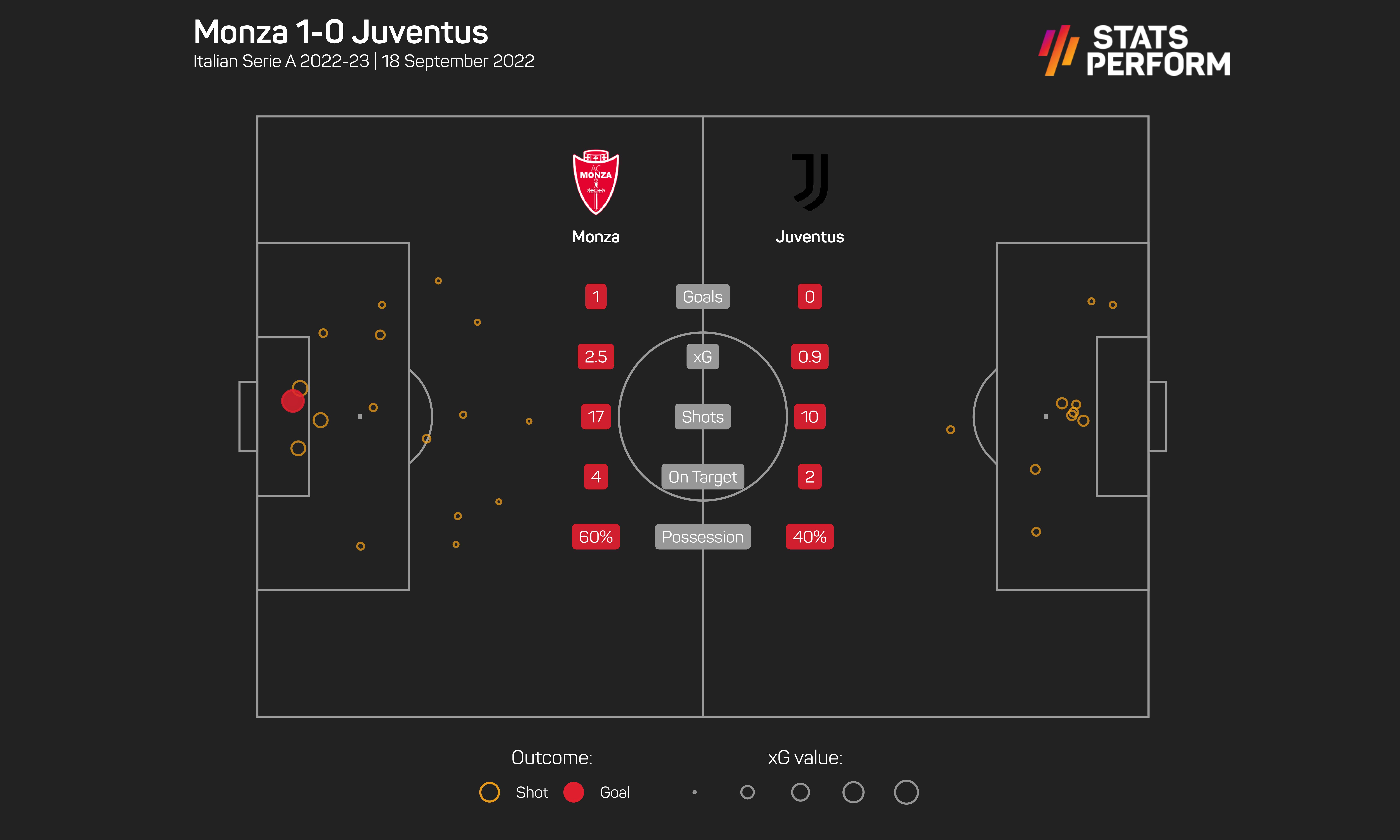 What does it mean? Allegri under pressure as Juve slip up again

Despite playing against Serie A's bottom team, the Bianconeri had only 39.8 per cent of possession and two shots on target, while Monza generated 17 attempts (four on target) and that all-important goal. In terms of expected goals (xG), which gauges the quality of chances and likelihood of scoring, Monza led 2.5 to 0.9, a resounding margin.

The hosts had the better of the game and Gytkjaer’s introduction meant they finally got the breakthrough they deserved.

After his 55th-minute arrival on the pitch, the 32-year-old hit the target with two of his three shots as his goal earned Monza their first three points of the season.

Juve were already struggling in the first half when the Argentina international was sent off for an elbow on Izzo.

The frustrated act may have been caused by his and his team's poor performance, with Di Maria winning just one of his four duels and completing just five of seven passes in the opposition half before being given his marching orders.

After the international break, Juventus will host Bologna in Serie A on October 2, while Monza will travel to face Sampdoria on the same day.