Lionel Messi and Angel Di Maria played starring roles as Argentina eased to a 5-0 win over the United Arab Emirates in their final outing ahead of the 2022 World Cup.

Di Maria scored twice and assisted one for Messi, who had earlier played in Julian Alvarez for the opener, as Argentina raced into a four-goal half-time lead.

Substitute Joaquin Correa scored the only goal of a disrupted second half as the reigning South American champions signed off for Qatar in style.

Messi was played clean through on goal but unselfishly squared for Alvarez to squeeze past Khalid Eisa as Argentina made their early dominance count with 17 minutes played.

Di Maria opened his account with a crisp volley that went in off the far post and then showed brilliant footwork to get away from his man, round the goalkeeper and add his second.

The UAE, who finished behind Iran and South Korea in qualifying to miss out on a place in Qatar, were further behind before half-time when Messi fired past Eisa after being played in by Di Maria.

Despite making four changes at the break, with Di Maria making way, Argentina continued to dominate and Correa slotted home a fifth on the hour despite being under pressure.

Caio Canedo went closest to pulling one back for the UAE with a shot that was cleared off the line late on, but La Albiceleste saw out a fifth clean sheet in a row.

What does it mean? Argentina produce five-star showing

Argentina lined up the friendly as preparation ahead of facing another Middle Eastern opponent in Saudi Arabia in their Group C opener next Tuesday.

Given the UAE had lost three in a row, and failed to quality for the World Cup, this was always likely to provide a chance for Argentina to flex their muscles and acclimatise.

So it proved as they produced an impressive first-half display to keep their momentum going, with this a fifth successive win in an unbeaten run stretching back to July 2019. 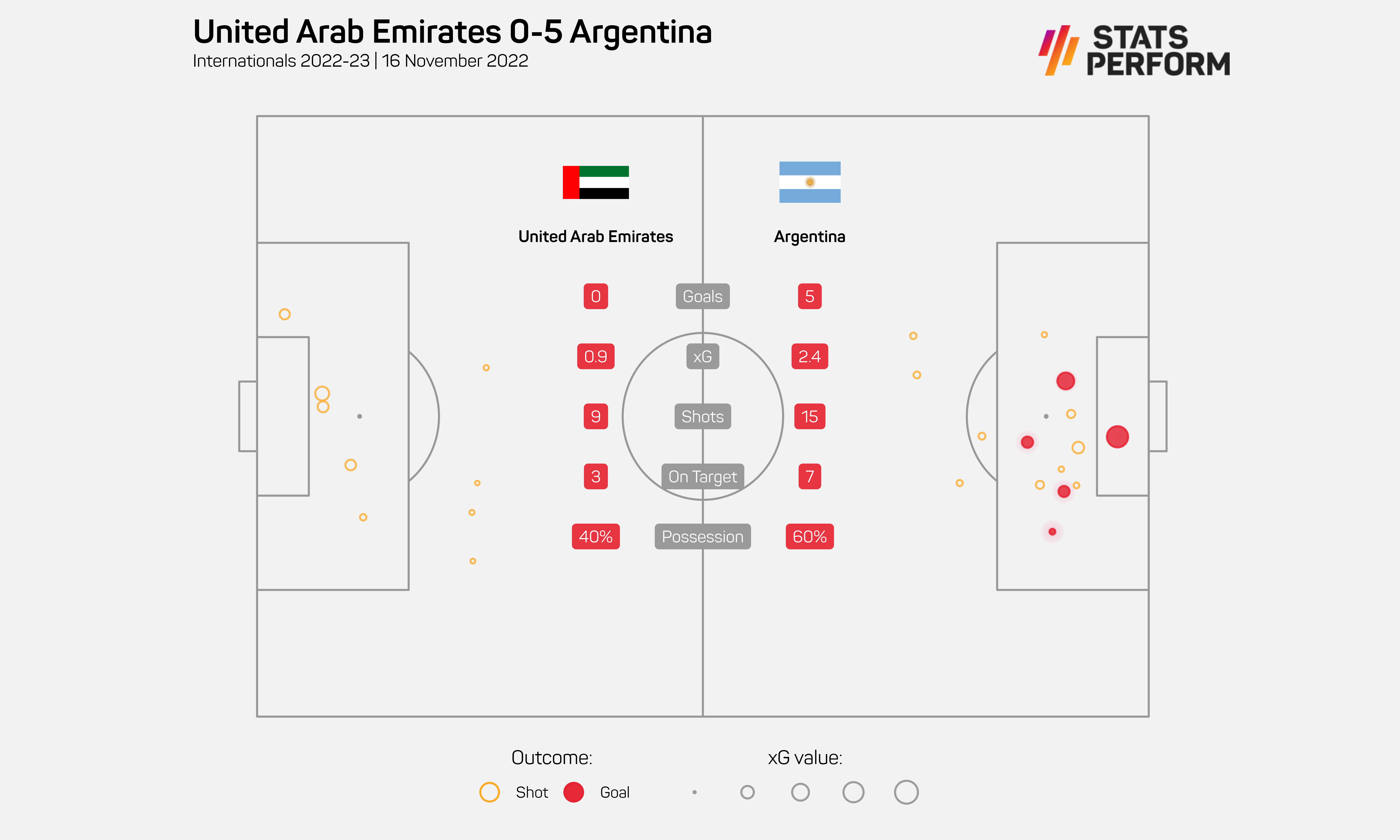 Messi has already said the upcoming World Cup will be his last – even if Scaloni has other ideas – and he looked in good shape as he played the full 90 minutes on Wednesday.

But Di Maria edged it in terms of being the game's best player as he scored twice, assisted another and created a joint-high three chances, despite playing only half the game.

Many people's favourites for the World Cup, it is no surprise why when looking at Argentina's form and squad depth.

Scaloni used 17 players in total against the UAE, with Correa in particular taking his chance from the substitutes' bench when it arrived to give his coach something to think about.

Argentina now head to Qatar ahead of facing Saudi Arabia in their opening World Cup game next Tuesday, while the UAE meet Kazakhstan in a friendly on Saturday.