Clippers rave about Kawhi impact after latest return from injury 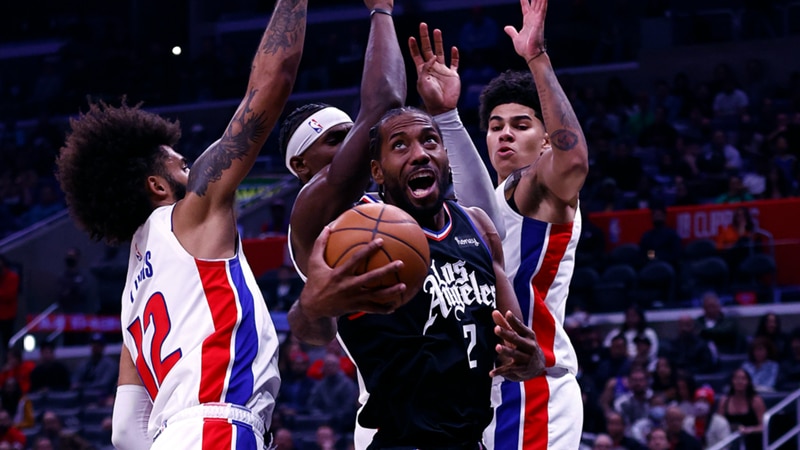 Kawhi Leonard had a limited statistical impact in his latest return from a knee injury, but Los Angeles Clippers head coach Tyronn Lue was delighted with his movement and defensive output.

The two-time NBA Finals MVP missed all of last season after rupturing his ACL in the 2021 playoffs, when the Clippers reached the Western Conference finals for the first time in franchise history.

Leonard started and played 25 minutes against the Pistons, having only managed 21 minutes in both of his two games off the bench earlier this season before his 12-game absence.

"He looked pretty good as far as his movement," Lue told reporters, with the win improving the Clippers to 9-7. "His impact defensively is huge for us.

"With him on the floor, we're a different team. It gives us a sense of calmness when he has the ball in his hand."

Leonard's availability going forward will be determined day to day by how he is feeling, but the small forward was content to be back for now.

"It's going to be a long journey. ACL recovery isn't just one year. It's a two-year process."

Reggie Jackson, who top scored for the Clippers with 23 points, said Leonard's presence was a major boost for the side.

"It is going to take a second to figure it out," Jackson told ESPN. "We know his spots, we know the shots he wants to get. He got great looks tonight. The only thing he didn’t have tonight was rhythm.

"His ability to get to his spots, his ability to be great, he did amazing, he drew a lot of defense for us and made it easier for us to get some easy shots.

"He didn’t have it necessarily going the way that we're all accustomed to, but he was still very special for us tonight. Happy to have him back. Hopefully we can keep everybody healthy and get this rolling."