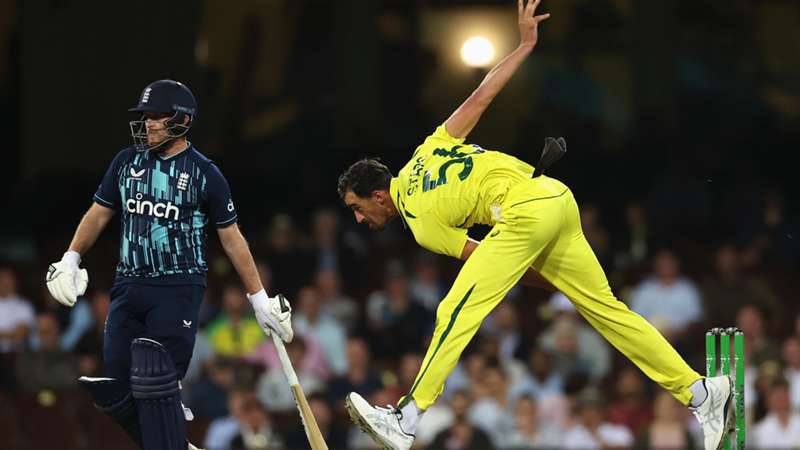 A big innings from Steve Smith was followed by devastating bowling from Mitchell Starc and Adam Zampa as Australia beat England by 72 runs in the second ODI to seal victory in the three-match series.

With captains Pat Cummins and Jos Buttler both resting in Sydney, the hosts set England a target of 281 after Smith hit 94 from 114 deliveries.

Despite a strong effort in particular from James Vince and Sam Billings, England's reply petered out as Starc and Zampa claimed four wickets apiece.

After a steady start on a dry pitch, Australia lost both David Warner (16) and Travis Head (19) inside the first nine overs, before Smith and Marnus Labuschagne stepped in.

The duo put on a partnership of 101 before the latter fell to Adil Rashid (3-57) for 58, with Alex Carey out next ball as England looked to keep their opponents from accelerating away.

Smith and Mitchell Marsh (50) put on another 90 together before Smith was finally out hitting a deep shot straight to Phil Salt, while Marsh and Starc fell to David Willey in the penultimate over as Australia ended on 280-8.

Starc removed both Jason Roy and Dawid Malan in the first over of the chase before the tourists could get any runs on the board, and a brief flurry from Salt (23) came to an end when he stepped away for a big shot, only to see his stumps clattered by Josh Hazlewood.

Vince (60) and Billings (71) steadied the ship as they put on a partnership of 122 until Hazelwood trapped Vince lbw.

Moeen Ali came in and hit a four and six from his first three balls before Zampa bowled him with the fourth, and also removed danger man Billings and Sam Curran (0) in his next over to wrestle the momentum back for Australia.

England's inability to protect their stumps continued as Starc (4-47) bowled Chris Woakes, before Willey (6) dragged a delivery on just moments after nearly kicking his own stumps in a panic as the ball bounced over them.

Zampa (4-45) mopped things up when he trapped Liam Dawson lbw for 20 as Australia dismissed England for 208 to take an unassailable 2-0 lead.

Australia ensure a series victory with another thumping win

While England had their moments with the ball, especially when it was in Rashid's hands, the ruthlessness with which Starc dismissed batsmen almost made it look like a different pitch.

Zampa was equally impressive with his spin, taking key wickets in important moments, and was also the most economical of the Australian bowlers at just 4.57.

Roy fails again with the bat

Roy had been hoping to make a point after being overlooked for Alex Hales in England's successful T20 World Cup campaign, but after scoring just six in the first ODI, he was out for a second-ball duck here.

Having also lost the first game of the series by six wickets, this was England's first instance of back-to-back defeats in away ODIs since January 2017.