Argentina head into the World Cup with the aim of adding global glory to their Copa America crown, but head coach Lionel Scaloni is all too aware of the challenges awaiting his side in Qatar – starting with first opponents Saudi Arabia.

Unlike that tournament, where they exited at the hands of Romania in the last 16, Argentina will fancy themselves to go all the way this time around with a motivated group led by Lionel Messi in what is set to be his final World Cup.

Argentina begin their Group C campaign against Saudi Arabia at Lusail Stadium on Tuesday, before facing Mexico and Poland, but Scaloni is not expecting an easy test against a side down in 51st in the latest FIFA rankings.

"We know Saudi Arabia well," he said. "They're a very good team, a technically strong team with fast players. They will make things difficult for us.

"We don't have pressure because at the end this is football; we're going to play a World Cup. We're conscious what football represents for Argentina, but it's sport and that's why we have to step on the pitch and do our own thing."

Argentina are one of three South American teams to have lifted the World Cup, alongside Brazil (five times) and Uruguay (twice), though not since 1986, in the days of Diego Maradona, have they got their hands on the trophy. 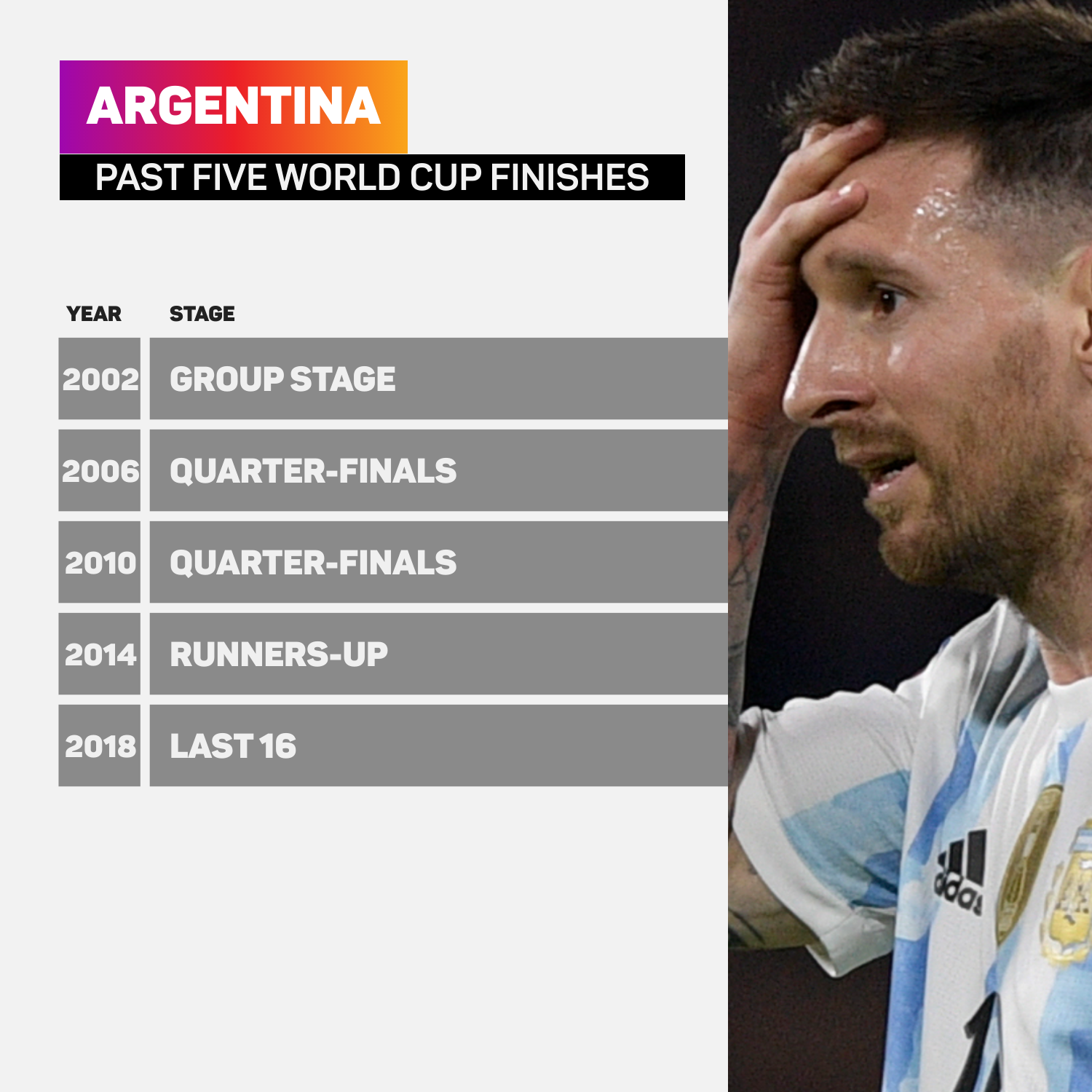 Indeed, the World Cup has provided far more painful memories than happy ones from an Argentinian perspective over the past three decades, even when factoring in their march to the final eight years ago, when they lost to Germany.

If anything other than going all the way will be considered a disappointment for Scaloni's side, advancing from the group stage for only the second time will be the aim for Saudi Arabia in this, their sixth participation in the tournament.

Herve Renard's charges booked their place in Qatar with 13 wins and only one defeat across their 18 qualifying matches, spread across two group stages, but the luck of the draw was not on their side for the finals.

Renard has experience of defying the odds after guiding Zambia to the Africa Cup of Nations crown in 2012, before doing likewise with a more fancied Ivory Coast in 2015 to become the first man to win the tournament with different teams.

With this his second taste of the World Cup, having previously led Morocco in the 2018 edition, Renard is dreaming of another magical journey with Saudi Arabia.

"We have a tough set of matches, but as a coach or a player you dream of qualifying for the World Cup and pitting yourself against the best," he said.

"The best teams in the world always come with the intention of winning it, but there are always upsets. When you are one of the smaller teams in the tournament, you must rely on shock results."

Messi has returned to something close to his best form in his second season with Paris Saint-Germain, the superstar forward having been directly involved in 26 goals in all competitions – a tally only Erling Haaland and team-mate Neymar can match among players from clubs competing in Europe's top five leagues.

The 35-year-old has already stated he expects this to be his final World Cup and, having lifted some almighty weight off his shoulders with his part in last year's Copa America triumph, he is now determined to become a world champion with his country.

Messi failed to register a knockout-stage goal in his previous four World Cups, totalling 756 goalless minutes on the pitch, but he has netted six times in the group stage and will back himself to add to that tally in this opener.

Renard is without 17-goal Fahad Al Muwallad due to the winger failing a doping test earlier this year, but there are a number of other options to call upon in the final third.

Al Shehri is among them, and the Al-Hilal striker will be looking to make his mark in Qatar after netting from all four of his shots on target in the AFC third-round qualifiers to finish joint-top of the scoring charts.

However, of the 11 goals Saudi Arabia have scored in the finals, four of those have come from the penalty spot – a higher proportion than any other side competing in Qatar.

Argentina have lost three of their past five matches at the World Cup, as many as in their previous 24 combined (W16 D5), but they are strong favourites for this meeting with Saudi Arabia.

That is reflected in our supercomputer prediction model, which gives Argentina an 80.2 per cent chance of victory, compared to just 6.9 per cent for Saudi Arabia.

A draw is predicted at a 12.9 per cent likelihood of happening as Renard's men look to pull off what would be a shock result.