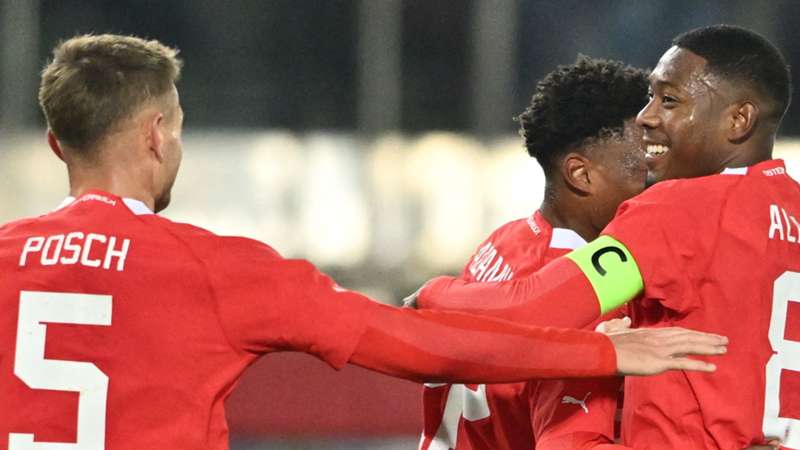 David Alaba scored a stunning free-kick as Austria swept past Italy in comfortable fashion with a 2-0 friendly victory on Sunday.

Austria came out the blocks flying and Xaver Schlager gave them an early lead before Alaba fired home a fierce free-kick to double the advantage before the break.

Roberto Mancini made numerous changes at the break, but it did not change the European champions' fortunes as they were beaten in Viennna.

The hosts took the lead after just six minutes, Schlager winning possession from Marco Verratti and exchanging passes with Marko Arnautovic before smashing a shot past Gianluigi Donnarumma.

Austria continued to apply the pressure, Nicolas Seiwald and Junior Adamu firing efforts off target, the latter then striking the post after Francesco Acerbi failed to clear the ball away.

Ten minutes before the interval, Austria's assault on the Italy goal paid off again when Alaba thundered an unstoppable free-kick from 20 yards in off the crossbar.

The second half began in the same fashion as the first, Marcel Sabitzer forcing two fine saves from Donnarumma, while Italy offered little until Giacomo Raspadori tested Heinz Lindner from close range.

Italy continued to dominate possession but could not pose enough of a threat in the final third, as Ralf Rangnick's side saw out another victory.

3 - Roberto #Mancini (57) is the 3rd manager with the most matches with Italy, overtaking Marcello Lippi and Cesare Prandelli (both 56) - behind only Vittorio Pozzo (95) and Enzo Bearzot (88). Podium.#AustriaItalia pic.twitter.com/h5ih9NrxCF

What does it mean? Austria back on track, work to do for Mancini

After a five-match winless streak to end their UEFA Nations League campaign and an unconvincing 1-0 victory over Andorra in midweek, Austria were back on form in a convincing victory against the Azzurri.

Rangnick's side were in control throughout and they could have won by a bigger margin, with Mancini still having plenty of work to do after missing out on the World Cup.

Arnautovic saw little of the ball but created two chances, including the assist for the opening goal.

The striker touched the ball just 28 times, less than any other starting player for the hosts, but posed a threat in an effective display.

Italy's loss was certainly not down to Donnarumma, who made four saves - including two vital stops in quick succession early in the second period to deny Sabitzer and keep his side in with a chance.

Italy's next scheduled match is a Euro 2024 qualifier against England in March, while Austria begin their qualification campaign in the same month against Azerbaijan.