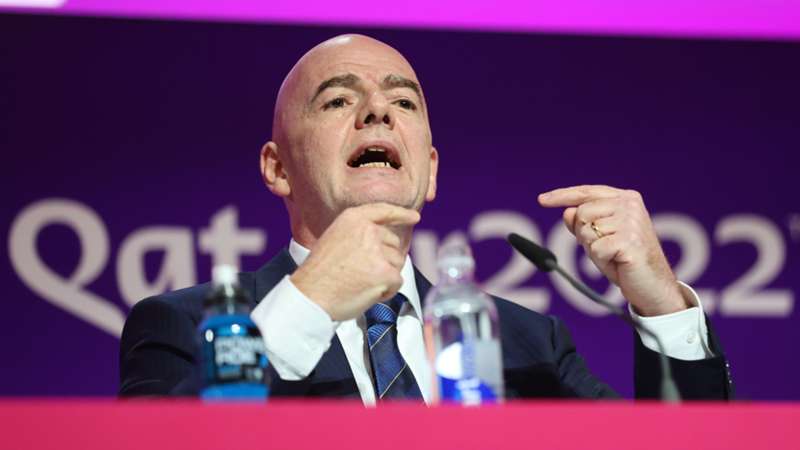 One of the topics highlighted was the coverage of fans in Qatar over the past week, with teams beginning to arrive in the country.

Social media has been awash with suggestions that many of the fans pictured in parades and congregating at team bases have not been the same nationality as the team they appear to be celebrating – or, "fake", to some.

It emerged a group celebrating the England team's arrival were Indian, and Qatar's Supreme Committee for Delivery and Legacy called the scepticism of their passion "disappointing and unsurprising".

"Help, don't divide. Try to unite. The world is divided enough," he told reporters. "We are organising a World Cup, not a war. Where anyone can come and enjoy. Look at the city – it's beautiful, it's happy, they celebrate.

"They went to see the teams, and what happened when they did – 'well they don't look like English, they look like Indians!'.

"Can someone who looks Indian not cheer for England? Or Spain or Germany? You know what this is – it's racism, pure racism. Everyone in this world has a right to cheer for who they want."

The promotion of 'togetherness' was a common motif throughout Infantino's press conference, which lasted an hour and 40 minutes.

He brought it up again when asked about the validity of Iran taking part in the World Cup despite a backdrop of women's oppression in the country.

Women cannot attend football matches in Iran, and widespread demonstrations in the country were recently sparked by the death of a 22-year-old woman, Mahsa Amini, who died in police custody two months ago after being arrested for not wearing a hijab properly.

It was highlighted to Infantino that FIFA's own statutes say discrimination of any kind is banned, including gender discrimination, but Infantino defended Iran's inclusion in the tournament.

Asked why England should have to face a country with such ideologies, Infantino said: "Because it's not two regimes playing each other, not two ideologies, it's two football teams. It's football. If we don't have football to bring us together… You want another World War? Okay, go ahead, without me. We have to bring people together.

"If we could go with a tournament in Iran, let's go because maybe that will change something. Of course we'd need certain guarantees, but together we can play in a tournament. In Iran there are 80 million people living.

"Do you think they are all bad? All monsters? I don't think so. How many people live in England? Are they all good?

"Do we have to exclude everyone because not everyone is good or says the right thing? We'll fight and fight to bring people together, and the more we can do that, the better it will be because no one else is doing that."